On January 21, 2019, Winnow’s founder Marc Zornes was presented with the Tech Disruptor Award at the fifth annual Circulars awards hosted by the World Economic Forum’s Community of Young Global Leaders. Winnow, founded in May 2013 in the U.K., with 6 offices globally, is a company that works to reduce food waste across the world by providing a way to identify and measure waste in commercial kitchens. “This year has been amazing as we received a lot of external recognition through awards,” said Ignacio Ramirez, MENA director of Winnow. “But the main point is not about winning, it is more about awareness raising. It’s about the fact that people recognize that there’s a problem out there and there are solutions. It’s more about awareness than the prize itself,” he added. Ignacio Ramirez is a Sevillian native and alumni of the University of Seville, and the problem Ramirez addresses is that of food waste in commercial kitchens across the globe. He joined the Winnow team 3 years ago, after leaving his job at Hilton Hotels. “We waste a third of the food we produce. Those are efficient numbers, which are usually lower than the reality,” Ramirez said. “It’s about how we redistribute resources, not how much we produce. Food is just one reflection of the way we consume stuff.”

A system that recognizes the food that is being wasted

The Winnow founders, Marc Zornes and Kevin Duffy, have made it their mission to reduce food waste by providing a method to identify and measure waste in commercial kitchens, record the reason for the waste, calculate the value of the wasted food, and keep track of this data in the cloud: “We have two systems. The main one is the Winnow Waste Monitor–a smart scale that sits under the bin. The scale is connected to the tablet, the tablet is connected to the cloud, and the tablet is loaded with the menu of the restaurants,” said Ramírez. “Every time they would throw something away, the system would recognize the weight, and then you go onto the tablet and say pastries, brussels, I don’t know. The machine assigns value that goes to the cloud and gets filled in a report that tells you what, and when, and how much you’re wasting.”

Winnow also recently launched  its new AI-enabled product, Winnow Vision, to revolutionise food waste management in commercial kitchens for the benefit of both businesses and future generations.“It is a system that is the same concept, but it uses a camera or image recognition to recognize the food that is being wasted. So basically, the system takes a picture of the waste and recognises what it is based on the menu,” said Ramirez. Using a camera, a set of smart scales and the same type machine learning technology found in autonomous vehicles, Winnow ‘learns’ to recognise different foods being thrown in bin and calculates the financial and environmental cost of this discarded food to commercial kitchens. Businesses and chefs can then adjust their spending and tackle a fundamental problem of food waste: overproduction.

But how is it possible for a machine to recognize the food in the picture of the waste?
“The first phase is the learning period, where the system needs to learn from the user, so the user still needs to input what it is because the system needs to take a picture and recognize it,” said Ramirez. The repetition of certain foods allows the machine to begin to recognize what is being wasted. The first few times the system will need the user to identify the food item, but it will gradually improve at recognizing the item on its own. This process, however, sounds less complicated than it really is. “When you talk about recognizing a tomato, that’s quite easy,” said Ramirez. “But the moment you chop the tomato, it looks like different stuff. And when you have tomato soup, tomato juice, gazpacho, salmorejo, tomato sauce, then things get a bit tricky and complicated.”

The image recognition is also slightly complicated by differences in food from different cultures. For example, a restaurant in China may have a food item that looks like meatballs but isn’t as meatballs are not on the menu. In this case, the machine will look for the item on the menu that is most similar to meatballs. “Now we are to a point to when the system is more than 80% sure of what it is, then it will log it in automatically, because in our experience human accuracy is about 80%,” Ramirez said.

Saving money in over 1,000 kitchens worldwide

The implementation of the Winnow technology in kitchens has been very successful, not only for Winnow, but for the clients. Hence, the systems are now used in over 40 countries and save money for big customers such as IKEA, Compass Group, and AccorHotels.

“We help our clients to reduce their food waste by an average of 50% on over production waste, so that means food that has been purchased, prepared, but never reached the guest. That is the main culprit”, said Ramirez. “That’s an average of over 25,000 dollars a year, but we have clients that save 200,000 dollars or more, and now we’re in over $1,000 kitchens worldwide. Today, we’re proud to be saving $30 million a year by reducing food waste. With the launch of Winnow Vision, our new goal is to save $1 billion dollars per year by 2025.” When they have reduced their waste, customers generally save 3-8% on food cost, and 95% of customers see a return on investment from 2x to 10x ROI within the first year.

Ramirez and Winnow believe that the main reason for food waste is a lack of awareness or ability to measure this waste. Once people realize how much money they are losing, or the scope of the problem, however, they will be motivated to change their ways. “The problem is that a lot of food waste happens because we don’t have this figure, so everyone knows that there’s waste, but we haven’t valued it,” Ramirez said.
“So, when you come back to people and say, hey, your waste is costing you about 50 euros per day, and it’s happening because of this, this, and this, it’s actually quite easy for people to change that.”

Once a kitchen has the motivation to change, Winnow also provides a means to realize that change. “By using this data, chefs or production managers that know the scale of the business can actually pinpoint where the waste is happening and why. They can get an idea of what dishes are fast moving and what’s slow moving for the guests. Then they can make changes to their operations to reduce what’s being wasted,” said Ramirez. It’s like if I send you your electricity bill, but instead of telling you your electricity bill is 100 dollars this month, I tell you it’s 100 dollars, but out of that 100 dollars 30 is waste because you keep forgetting to turn off the living room light every time you go to sleep.”

Once you know how much you are wasting and where this waste is occurring, it is not difficult to change your behavior to remember to turn off that one light in the living room. The Winnow model works in the same way. “It will always be, in a good way, an ongoing project, because we will always want to improve it, and obviously technology will,” Ramirez said.

At the head of this company is the Winnow leadership team, a diverse group of nine people with different cultural and professional backgrounds who have worked to promote and develop this award-winning company. “You have people who studied philosophy, people who studied Language, many things. A data scientist does not have to be an engineer per say; it just needs to be someone who is comfortable with numbers, comfortable with data,” said Ramirez.

Ignacio Ramirez, for example, was in the hospitality industry before he joined the Winnows team in 2016. “I was working at hotels and restaurants my whole life, so I’d been a waiter, a restaurant manager, director of food and beverage at other corporations, and I moved to Dubai with Hilton Hotels,” said Ramirez. “I came home one night and was watching videos on Youtube. At some point this guy came in, it was Mark Zornes, one of the founders, and it was a TED Talk and he was just explaining what Winnow was and what the food waste issue was. And I kind of loved what he was talking about. I started looking and googling it, and then it turns out that they had a position open in Dubai.”

Ramirez is not the only team member who took a risk to pursue his passion: the founders, Marc Zornes and Kevin Duffy, began Winnow in May 2013 in a risky move that has proven to have paid off. “Mark was working at the time with McKinsey & Company, and they were doing research about new opportunities in sustainability–so basically, economic opportunities and looking at valuing the economic issue and the issue in sustainability,” said Ramirez. The founders “realised that food waste was one of the biggest issues with the biggest financial opportunity and not so many people were trying to solve it. So, they saw an opportunity there and they decided to quit their jobs and start working on it.”

Since the beginning of Winnow, the team has had its main goal in sight: to make it as easy, convenient, and beneficial as possible for people to reduce their food waste, and hence their carbon footprint. In order to make this dream a reality, however, Winnow will need to expand from commercial kitchens in large corporations to every kitchen. “Right now the product has a cost of around $300 to $600 per month, depending on the model, but we want to make this product as accessible as possible so we can grow and provide that solution to as many kitchens as possible,” said Ramirez. “At some point we want to reach a place where, food waste management systems are just something that you put in the kitchen like you put an oven.” 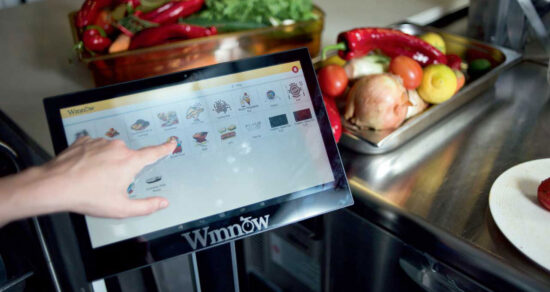 Winnow and the quest for environmental sustainability Winnow, a rising tech startup, offers a system to limit the amount of food waste in kitchens within the hospitality industry around the world
LEER MÁS →