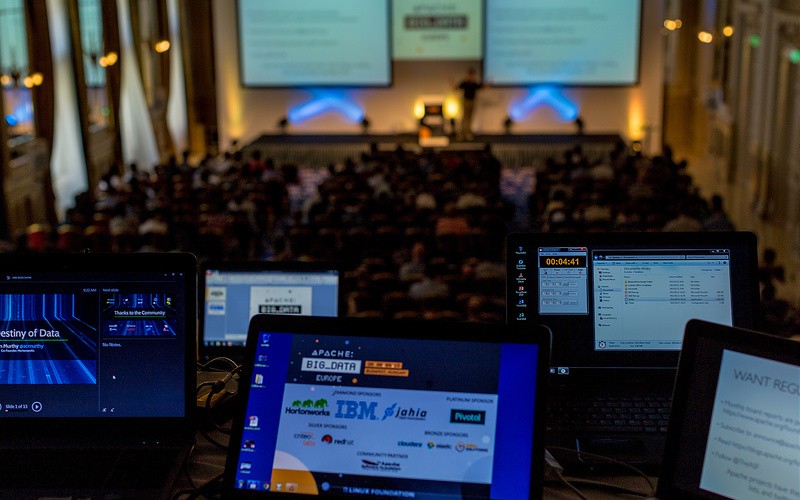 Two international conventions will be gathering in Seville, one of them, the older Apache convention, for the first time in Spain. Apache is one of the largest sources of open source software and starting points for the development of web pages since its creation in 1995. From November 14 – 18, a total of 700 attendees, consisting of both professionals and businesses from all over the world, will be gathering at the Meliá Sevilla Hotel to discuss the technologies and projects that will mark the future of the most popular open source HTTP web server.

Apache: Big Data (November 14 – 16) and ApacheCon Europe (November 16 – 18) are the two most important meetings for Apache developers and users. Registration for the meetings is still open. The events have been organized by the Apache Software Foundation (with the collaboration of Linux Foundation), a non-profit corporation created in 1999 to support these types of software projects. Today, the foundation consists of 500 members and more than 4,500 collaborators worldwide. Since its inception, the Apache Software Foundation has organized more than 30 international conventions in North America, Asia, and Europe. Seville is the first Spanish city to host a gathering of this size, joining the ranks of capitals such as London, Dublin, Amsterdam, Las Vegas, and Vancouver. Conferences and seminars on Big Data

Apache’s international gathering in Seville will be divided into two large events. The first one will begin on Monday November 14th with three days dedicated to “Big Data”. Participating in these discussions will be the Linux Foundation, an organization dedicated to the international development of Linux, an open source software system created by Linus Toryalds. Projects, developers, and technologies that work with large volumes of data are invited to participate in Apache’s Big Data conference in Seville through an extensive program of conferences and seminars with the aim of finding points of contact and establishing collaborative efforts.

When it comes to “Big Data”, Apache offers the most globally used tools for processing large volumes of data. Some of their most popular projects, such as Cassandra, Hadoop, Spark, and Kafka, are featured in the convention and will be explained by experts in their development. Additionally, the conference will be addressing topics such as the technologies and techniques that that are shaping the ecosystem of data in fields such as finance, the media, education, and energy.

The conference will feature prominent speakers such as Rich Bowen, executive vice-president of the Apache Software Foundation; Stephan Ewen, CTO of Data Artisans; Alan Gates, Cofounder of Hortonworks, and representatives from world-class companies such as IBM, Intel, Uber, and Red Hat, amongst others.

One example of involvement in this conference is that of Simon Scerri, coordinator of the project Big Data Europe, within the Horizon 2020 strategy of the European Union. He will explain how progress is made in the application of predictive analytic systems for areas such as health, food, agriculture, and transportation. Another example is that of Ankur Bansal, a software engineer at Uber, who will explain how this large company is dealing with its mind-boggling development of information technology infrastructure for managing enormous amounts of data in real time, all while incorporating open source tools like Apache Kafka and Samza.

The 4th Bitnami Bootcamp in the Bitnami Sevilla office.

Taking place during the final portion of the Apache meeting: Big Data, beginning Wednesday November 16th, also in the Meliá Hotel, ApacheCon, the Apache Software Foundation’s official event. Until Friday November 18th, the largest global community of collaborators, suppliers, developers, and users of Apache technology will be gathering in Seville, where they will be enjoying the support of companies like Bitnami, Yahoo Japan, Red Hat, and Accelerite.

The first official ApacheCon event took place in 2000 in the American city of San Francisco. It is the most influential dialogue platform within the international Apache community. Once a year, the attendees meet up and exchange ideas about the new trends in the open source software industry through networking sessions, presentations, and conferences lead by experts in the HTTP web server, the world’s most popular open source software. ApacheCon Europe’s schedule of events in Seville include sessions and mini-summits dedicated to specific projects organized by their respective communities. Additionally, the meeting includes events dedicated to business incubation, security and cloud-based work, amongst others.

Amongst the speakers, it is fitting to highlight Jim Jagielski, director and co-founder of the Apache Software Foundation; Tsunayoshi Egawa, a senior manager at Yahoo Japan; Bruno Terkaly (Microsoft); Bertrand Delacretaz, a scientist at Adobe; Simon Chan (Salesforce); and Jaydeep Marfatia, director of “Cloud Product Management” at Accelerite, the main sponsor of the conference.

The price of registration for each event ranges from $375 to $999 and can be completed on the Apache Big Data and ApacheCon websites.